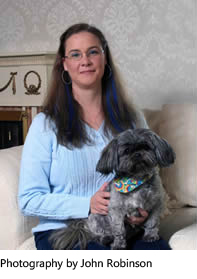 Since P.A. DePaul first sounded out the words “See Spot run” and “See Jane walk,” she was hooked. Couple that with weekly trips to the library where she usually tried to get the maximum amount of books allowed, and watching both parents get lost in a book, you would think she’d get a clue that writing might be something she should investigate. But sadly, no. (She’s a little slow on the uptake.) After years of escaping into fantastical worlds in books, P.A. DePaul started to get an inkling in the back of her mind that she could probably create something fun too. But again, as she was slow to move on to anything concrete, the idea just continued to fester until she picked up J.R. Ward’s compendium, The Black Dagger Brotherhood: An Insider’s Guide. Eureka! The three-way bulb in her brain finally clicked higher than the dim-watt. When she finished reading the “Advice and FAQs” section, her hands shook and her palms got sweaty. After she blinked away the lightheaded feeling, she thought to herself, “I can do this. I’ve read enough books to know what’s out there and what’s popular. I’m gonna give it a try.” Then she sat in front of her computer, chin in her hand, and drummed her fingers. What to write about? Even though she loved reading about vampires, werewolves, shape-shifters, and witches, she realized she had nothing new to offer. Frustrated, but not daunted, she went to bed and woke up the next morning with an idea; a concept that refused to go away. A couple of attempted manuscripts and storylines later, she finally got it right. Knowing she had a novel worth fighting for, she joined the Romance Writers of America (RWA) and entered it in four contests. She won third place in Utah Chapter’s Heart of the West Contest! Woohoo! Confirmation she was on to something. 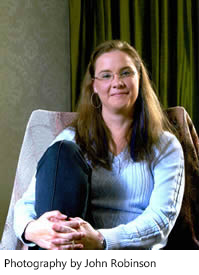 P.A. DePaul originally hails from Carroll County and Baltimore County, Maryland, but also lived in Macon and Warner Robins, Georgia. She currently resides in a beautiful community just outside Philadelphia.

When her head is not completely absorbed with listening to her very demanding characters tell their stories, she can be found with her head in a book—not only enjoying the story but studying what makes the novel work for her or not. She loves action-adventure movies (if it blows up spectacularly, she’s there) and watching way too much TV. (Can everybody say “Procrastination?” To which she usually replies, “But it’s research!” Yeah, they don’t believe her either.). Her husband and three-year-old Shi Tzu, Montgomery, sometimes stand outside her closed office door and wonder, “Is she still alive? Do we dare bother her? What if she’s on a roll?” Monty usually answers by scratching on the wood anyway. Gotta love a dog who doesn’t care about boundaries! Good thing he’s so cute!